Squirrel hunting is one of the few hunts that doesn’t require much gear. Quite frankly, you may get away with only one or two of the items below.

Many times I have harvested a bag limit of squirrels with a .22 and two coins.

One thing you will most certainly need to harvest a squirrel is a weapon or tool to make the kill.

There are a few choices in this department, and what you choose will be a matter of personal preference and your level of skill.

It’s much easier to kill a squirrel with a shotgun than a bow. However, if you are a skilled bowhunter, a bow may be your weapon of choice.

Bowhunting for squirrels is an idea that many hunters may balk at. Sometimes it comes with a heavy price tag with lost or broken arrows and little to nothing to show for it.

But for those diehard bowhunters, there is simply no other way to hunt squirrels.

Believe me when I say you got to be a seasoned bowhunter before taking on this challenge. Squirrels are fast, insanely fast.

They usually have a solid backdrop in the shape of an arrow smashing hardwood tree, and trying to set a pin amongst the branches and leaves is no easy feat.

Nevertheless, it is one of the most thrilling methods of hunting squirrels.

You can use a compound or a recurve for bowhunting squirrels. Both have their pros and cons, and it is a matter of personal preference.

Compounds are better for the unaware squirrel or the ones that think they are out of reach at the top of the tree.

Recurves are an excellent option for the curious squirrels that come in barking at your presence or come to your call.

When using a bow for hunting squirrels, you will need to think of what projectiles to use. This means what type of arrows, tips, etc., you want to use.

Carbon arrows are all the rage in the hunting industry, but they are by far one of the more expensive arrows. They may be a bit too expensive to warrant taking them squirrel hunting.

Other more affordable options exist, like aluminum or fiberglass. These arrows are good enough to kill a squirrel, and it’s no big deal if you lose or break one.

Squirrels are usually shot at close distances, unlike deer, so the arrow does not have to fly as well as it would big game hunting.

Another consideration when choosing your arrow for squirrel hunting is the type of fletching.

While it’s perfectly fine to use vanes, it might be worth considering flu flu fletching.

As we mentioned above, the arrow doesn’t have to fly very far, and given that you will likely be hunting in thick timber, you risk losing one that does fly far.

Flu Flu arrows come out fast but quickly slow down due to the wind drag on the fletching. This stops the arrow from flying far.

It’s not practical to use broadheads for squirrels. Like using carbon arrows, using broadheads is just too expensive.

Another issue with using broadheads is that it would cause too much meat damage to a squirrel.

Instead, there are a few types of small game heads much more adept to the job.

Small game heads or SGH are designed to kill small animals like squirrels or rabbits by blunt force.

There are also heads called judo points that act in a similar way as sgh but come with springs that cling onto the animal.

Many hunters make improvised heads for squirrels by using a field point with a washer behind it.

Now that we have established, bowhunting for squirrels is not only possible but is also fun. Let’s look at some of the more familiar ways of hunting squirrels.

With that said, rifle hunting squirrels is as successful as any other method you can harvest squirrels, if not the most successful.

Generally, two rifles are used for squirrel hunting: a .22 LR and a muzzleloader.

The .22 is a squirrel hunting favorite. It’s light, the ammo is cheap, and it’s plenty capable of taking squirrels.

For those looking for a little more of a challenge and are out for the enjoyment, a muzzleloader is an option worth considering.

It requires a little more effort and gear to carry around, but a day hunting squirrels with a muzzleloader is a day well spent.

The other half of the legendary squirrel debate is the shotgun. Whichever you choose, know that a shotgun is a solid option for squirrel hunting.

The shotgun has its benefits when the foliage is dense, or the squirrels are moving fast. In this scenario, it outperforms the .22 and definitely outperforms a bow.

The other side of the argument is that it causes too much meat damage.

This is debatable, and many people will debate it. If you are going out with a full choke and number 4s, it most likely will cause damage. However, a number 71/2 will not cause so much damage.

Squirrels are hunted with 4 to 71/2, with many hunters settling in the middle on a number six.

If you are shooting squirrels from the tops of the trees with a 12 gauge, then you are better off going with an open choke and a 5-61/2

If you are calling them in, then it is worth considering a modified choke.

In the end, shotgun hunting for squirrels is as flexible as you want it to be. You can use a 12, 16, or 20 gauge gun, a myriad of loads, and an open, full or modified choke.

It’s all a matter of your method of hunting and preference and will take some trial and error.

Binoculars can help with your squirrel hunt, but they are not a necessary piece of gear.

They are great for scouting the tops of trees and making out odd shapes that may or may not be a squirrel.

If you do choose to bring a pair of binoculars, they don’t need to be 10×50 scouting pair.

A compact pair of 8×25 or 10×28 will be perfect. They are small, compact, and light enough to carry around for a few hours.

Calling squirrels is by far one of my favorite ways to hunt them. I love taking a crack at a squirrel at the top of a tree, but nothing beats a lazy afternoon of just sitting out calling squirrels.

Some squirrels come with a curious nature, and some come with an attitude barking at you for daring to make noise. Watching them is a great way to get to know and understand them.

There are plenty of different ways to call squirrels, below I’ll mention a few of the more popular methods.

Handheld calls are one of the most popular types of squirrel calls. They are convenient and easy to use.

There are many different models out there, and most of them are as good as each other. I like the Primos Squirrel Buster, and it works great. 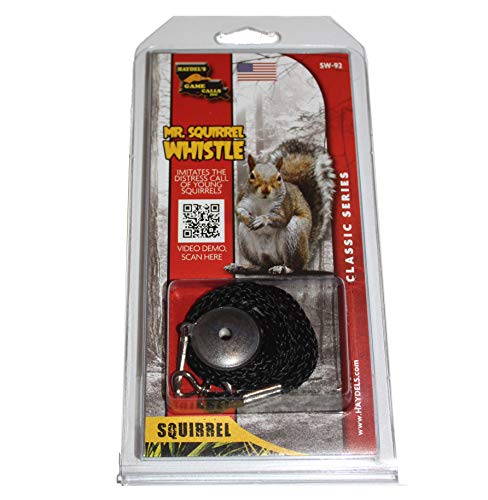 If your looking for a hands free squirrel call then a mouth call or whistle is a good alternative.

A whistle like the Haydel’s Mr. Squirrel Whistle is good for getting squirrels riled up and will have them coming in barking at you.

By far, my most favored way of calling squirrels is by improvising. I’ve called squirrels by tapping coins together, rubbing coins together. or with a plastic knife and fork. Each of these methods worked just as well as a mouth or hand call.

I find the most success in tapping coins together.

One of the greatest things about squirrel hunting is you don’t need expensive camouflaged gear. I’ve been squirrel hunting in top-of-the-line camo gear (it’s what I own for turkey hunting) and in regular street clothes, and the squirrels reacted no differently.

What is important is your clothes should be comfortable.

The type of boots you choose for squirrel hunting will depend on the habitat you plan on hunting and the time of year you are hunting.

Sometimes when squirrel hunting I’m sitting still for quite a while, and other times I walk long distances.

If I plan on traveling through any marshy area, I usually wear my lacrosse boots.

If I’m putting in a lot of distance, I go for a hiking-type boot, especially if it is warm out.

At the start of this article, I mentioned you could get by with one or two things on this list. I think it’s fair to say that a bug deterrent should be one of them.

Is it absolutely necessary? Not really. Will you stay out in the woods long enough to hunt a squirrel without it? Not if you hunt where I do.

The thing about squirrel hunting is it’s best done in the early morning and late evening. This happens to be the same time as the peak activity of all sorts of biting critters.

Thermacell is a fantastic piece of kit to take out with you. I use the Thermacell MR450, and it works quite well. It’s not great if there is a strong wind or if you’re moving fast. But if you are sitting out calling, it is definitely worth the investment.

If I’m putting in miles or it’s particularly windy, I still use my Thermacell, but I also use a bit of bug dope, and together they seem to do the trick.

Ticks are a part of being a hunter, and there is nothing you can do about this. However, by spraying some permethrin on your boots and clothes before heading out, you can definitely lessen the amount you pick up.

Hopefully, by using some of the squirrel gear mentioned above, you will be successful and thus need a knife.

After you harvest the squirrel, you will want to skin it and will need a good knife to do so.

A squirrel knife doesn’t need to be big by any means; a small knife will do just fine as long as it’s sharp.

Squirrel hunting doesn’t need to be technical or require a lot of gear. I’ve harvested many squirrels with a .22 and two quarters.

Squirrel hunting is a good introduction to hunting because of the low gear requirement. You can get a taste of hunting before forking out thousands on gear.

The best approach is to start small and add more gear as you go along. Before you know it, you will have more objects filling your garage than you know what to do with.